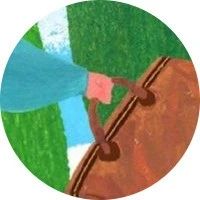 everyone is not an island when he is alive.

as long as you are in interpersonal relationships, you can't escape all kinds of social roles, parents and children, husband and wife, friends and partners.

when I was young, I wanted to enter the outside world, but what if my parents didn't agree?

an uncle in my hometown is such an example.

growing up, he was so well protected that he was not allowed to do anything at home.

at the age of 18, he thought of the outside world very much, and for fear that his parents would not agree, he secretly packed his bags and left home one night.

when Grandma saw the note he left, it was like a collapse of heaven and earth, saying that she would find someone to bring him back.

even forced by death, he called his uncle home.

after my uncle came back, he obeyed his grandmother in everything, but his character was like a different person, and it was hard to see his cheerful smiling face again.

when I was a child, I didn't know why my uncle was often unhappy. When I grew up, I realized that I couldn't live to be the melancholy I wanted to be.

We think filial piety is to listen to the elders in everything and not to go against the wishes of the elders, even at the expense of their lives.

in the past, such fulfillment was celebrated as filial piety, at the price of restraining the heart of yearning for the distance, listening to the wishes of parents, and living a life in line with their parents' expectations.

but that is always what parents want, not their own, so it is difficult to give birth to too much.

however, a relationship in which one person's happiness requires another person to complete and compromise is not a healthy relationship.

the best family state is for everyone to be themselves freely on the premise of mutual respect.

so what should I do in the face of the will imposed by my parents?

A classmate in college did not allow him to volunteer far away. In order to go to the school he liked, he insisted on his choice.

after graduation, his family sent him home to work again and found him a good job. he didn't want to live a stable life at first sight, so he insisted on going to Beijing to do the job he liked.

his parents have also been urging him to go home. He patiently communicated with his parents what he wanted to do, and said that he had enthusiasm only by doing this, and asked his parents to give him a few years, if he did not achieve what he had achieved after a few years.

A few years later, he finally did something, and his parents never urged him to go home again.

the best thing to do is to be filial rather than smooth.

of course you should be filial to your parents, but you have to make your own decisions about your own life. Because this is their own life, parents are not allowed to interfere.

the best couples work together

to observe the marriage and divorce of people around them in recent years, and find an interesting phenomenon: most of the happy and stable marriages around them are strong unions.

you have to ask, am I too poor and weak to get married?

it's not a question of whether I deserve it or not, because my economically less well-off friends are single.

if you want to ask why you are single, because marriage is too difficult, but being single is easier.

marriages with a clear distinction between strength and weakness are divorced within a few years.

when I was in college, the prettiest girl in the class married a very rich boy at that time. At that time, we all thought that the two of us were a perfect match.

after marriage, the class flower directly became a housewife and took care of her husband's daily life. at first, there was still a lot to talk about, but gradually it became less and less able to talk together.

then the original families of the two are different, there are too many conceptual differences in life, quarrelling constantly, and finally they have no choice but to separate

Searching for a superb formal dress for principal sponsors that will fit your budget? The largest choice of superb dresses with discounted prices.

A marriage with an obvious gap between strength and weakness. there are two secrets to a long-term marriage: one is that the weak party keeps sustained progress and does not lag behind ideologically; the other is that the other side always gives in to each other.

the former method is in your own hands, and the decision on the latter is in the hands of others.

there are later stories about the class girls.

after the divorce, Banhua had to make a living on her own, and she finally woke up: women are still reliable on their own, and their style has become vigorous and aggressive.

she went to learn eyebrow tattoo and manicure, and then opened a beauty salon.

she, who used to live as a lady, began to serve others. Someone asked him why he chose this industry, she said to make money, and I like to help people become beautiful.

because of her good craftsmanship, there were so many repeat customers that she returned to the shop not long after opening. She also opened several branches, and she directly became the boss.

later, she was going to remarry, and her husband was also the boss of an enterprise. Once, she asked her husband why he chose her as his wife.

he said that every time he saw that no matter how big the difficulties she encountered, she was able to deal with it on her own, and he felt full of vitality.

after the couple got married, her husband obeyed her, and the marriage lasted for a long time.

the essence of marriage is cooperation, not poverty alleviation. When people's resources do not match, marriage will sooner or later expose problems.

the best marriage is that you are good and I am not bad.

it can be observed that those marriages that come to the end are always strong together, and both sides can take it out.Resources, who do not take advantage of each other, will be stable for a long time.